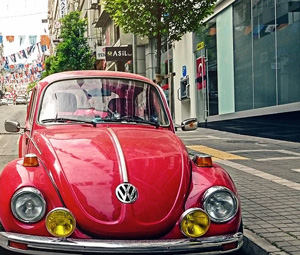 Volkswagen (VW) is a German automobile manufacturer that began in 1937 with Ferdinand Porsche's "People's Car." The VW Type 82E was given the moniker "Beetle" because of its unusual shape. The Volkswagen Beetle was one of the first automobiles to be created with the help of a wind tunnel during its development. The VW Bus, a predecessor of today's minivans, joined the Beetle as an iconic symbol of 1960s counter culture. As the Volkswagen brand grew, new models and designs were introduced, including the Golf and Rabbit, which were quickly followed by the Volkswagen Jetta and VW Passat.

Volkswagen has recently produced a crossover SUV and even revived the Beetle. Volkswagen now produces a whole line of incredibly popular, fuel-efficient cars and SUVs in facilities all over the world, ranging from entry-level to luxury models. Volkswagen has also grown its brand portfolio to include Audi, Bentley, and Lamborghini.